Now that I've discovered a way to boost Clusters Galore analysis even further by using fastIBD, I will start experimenting with different regional populations. This analysis took about 5 hours to complete, so it appears to be quite practical.

For my first experiment, I carry out an analysis of various populations from the Balkans and West Asia. 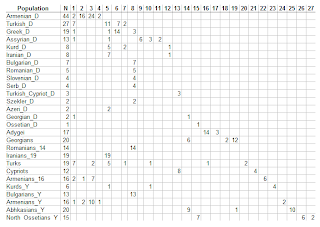 27 different clusters were inferred with 17 MDS dimensions. Some interesting findings:
I cannot stress the importance of participation strongly enough. When groups have more participants, it is possible to both:

For example, the great participation of Armenians in the Project has now allowed me to discover structure within the Armenian population. It appears, that cluster #2 corresponds to a more "western" Armenian group, and #3 to a more "eastern" one, with some overlap between the two.


You can also see a visual representation of inter-population IBD: 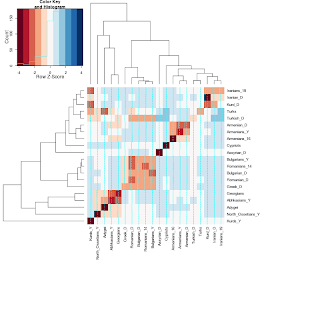 I have only included populations with 5+ participants in this representation. Reddish shades express high IBD sharing; bluish ones low one. The heatmap has been scaled by row.

As you might expect, values across the diagonal are "reddish", since individuals within populations tend to have high IBD sharing with each other.

A few features "pop out" of the screen. Going from top to bottom:
You can probably get more out of the figure, but these appear to be the most salient features.


The results can be found in the spreadsheet, and include:
Last but not least, I want to remind new project participants to leave a message in the Information about Project samples thread. Your comment will not appear immediately, since comment moderation is on, and also note that there are multiple pages of comments.


If you haven't joined the Project yet, I encourage you to do so if you are eligible.
Posted by Dienekes at 1:22 PM
Email ThisBlogThis!Share to TwitterShare to FacebookShare to Pinterest
Labels: Armenians, Assyrians, Balkans, Caucasus, fastIBD, GALORE, Greeks, Iranian, Results, Romanians, Slavic, Turkic