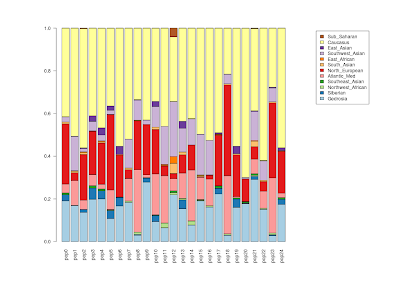 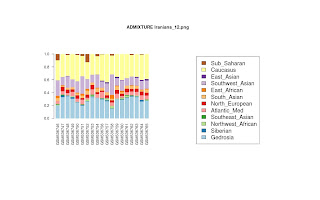 Looking at the admixture proportions, we can tell that the two clusters do indeed seem quite similar, but there are some differences, e.g., an excess of North_European in pop18, and an excess of Caucasus in pop23. This makes sense given the geographical origin of individuals belonging to the two clusters.
Posted by Dienekes at 2:59 PM 1 comments
Email ThisBlogThis!Share to TwitterShare to FacebookShare to Pinterest
Labels: Anatolia, Balkans, ChromoPainter, Experiments, Greeks, Iranian, Slavic, Turkic 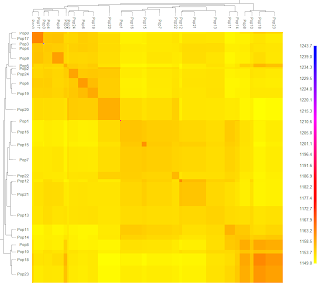 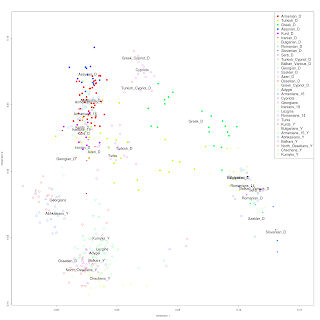 Averaged results were included only for populations with >=5 members.
The raw chunkcounts for all 413x413 individuals can be found here.
Posted by Dienekes at 1:24 PM 6 comments
Email ThisBlogThis!Share to TwitterShare to FacebookShare to Pinterest
Labels: Anatolia, Balkans, Caucasus, ChromoPainter, Results

The Dodecad Project is not affiliated with any genetic testing companies. Until now, I have included Project participants from 23andMe and FamilyTreeDNA "Family Finder" tests, but it has come to my attention that there are new players in the field, such as Ancestry.com (see post on Your Genetic Genealogist) and Lumigenix (see post on GenomesUnzipped).

If you have data from any company entering this field, please contact me at dodecad@gmail.com (do not send data right away!). That way, I can find out how many markers are in common between the new tests and my existing datasets, and figure out how easy it will be to convert them for use in the Project and in DIYDodecad.
Posted by Dodecad Project at 12:18 PM 1 comments
Email ThisBlogThis!Share to TwitterShare to FacebookShare to Pinterest
Labels: Dodecad
Newer Posts Older Posts Home
Subscribe to: Posts (Atom)