Vasishta, is asking Eurogenes for help in demonstrating that the Kalash have Northern-European-specific segments:

Yes. He keeps citing the Kalash as proof that the Indo-Iranians were an almost exclusively a West-Asian like population, even though I personally think the mainly West Asian-South Asian assortment of the Kalash in his analyses might be an artifact of their inbreeding and isolation, thus confusing ADMIXTURE. Zack's K=11 at Harappa has shown that the Kalash display around 22% of the component modal in Lithuanians. Yet, he ignores the North/Eastern European admixture in Northwest Indians and North Indian Brahmins (in his own analyses at that!). Interestingly enough the aforementioned groups tend to score a sliver of Northeast European admixture in Dr.Doug McDonald's analyses, with the top matches for that sliver usually being Lithuanians, Russians and Finns; in that order. It (NEU) is even found in frequencies of around 4-6% in Dravidian-speaking southern Brahmins. As much as I hate to say it, he is indeed rather stubborn and has somewhat of an underlying agenda.

David, I think you should look into proving that the Kalash do indeed have some NEU-specific segments. I would be super-surprised if they didn't, given that more mixed populations south of their geographical area display it themselves.

It appears that Vasishta disagrees with me because he "personally thinks" that the admixture proportions of the Kalash are due to inbreeding and the limitations of ADMIXTURE.
Does he cite any studies or make any argument why ADMIXTURE would remove precisely the component that he is so eager to be present? No. While genetic drift in an isolated population could indeed lead to the loss of genetic diversity, there is no reason to think that this would lead preferentially to the loss of Northern-European segments. It is strange that Vasishta accuses me of bias and yet, at the same time, invokes the magic of some unspecified flaw of ADMIXTURE for the loss of his favorite component.
Vasishta invokes the Harappa Ancestry Project K=11 admixture analysis in support of his idea that the Kalash have 22% of the component modal in Lithuanians. However, he neglects to mention that at K=11 there is no West-Asian or Caucasus centered component in the HAP analysis, but rather only "European" (modal in Lithuanians) and "SW Asian" (modal in Yemen Jews). It is indeed strange that he accuses me of bias for providing evidence about the relationship of the Kalash with West Asia, while at the same time, showing preference for a level of analysis where such a component is lacking.
The West Eurasian cline between Arabia and Northeastern Europe is evident in the 'weac' admixture analysis, where the European-centered component (Atlantic-Baltic) is present in populations such as Assyrians and Armenians whereas it is lacking at the appropriate level of resolution. Therefore, the fact that the Kalash show "European" admixture at the level of Europe vs. Near East does not mean that they ought to show such admixture at the level of Europe vs. West Asia/Caucasus vs. Arabia.
One of the benefits of DIYDodecad has been the availability of data from projects that have hitherto been black boxes. In the interest of transparency, I have taken the Eurogenes K=10 "test" calculator and repeated my analysis of the Kalash, that had been previously shown by me to be a fairly simple West/South Asian mix. I could have waited for him to get around to it, but since he's quick on the talk and slow on the trigger, I decided to do it for him. 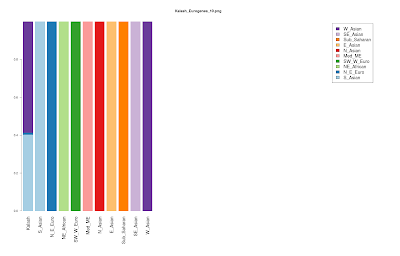 The admixture proportions of the Kalash, according to the Eurogenes K=10 are: 40.3% S_Asian, 58.7% W_Asian, 0.9% N_E_Euro, 0.1% N_Asian, and hence the analysis based on the Eurogenes K=10 components confirms the analysis based on my eurasia 7, "showing the Kalash to be a "West Asian" population (62.4%) with substantial "South Asian" admixture (37.1%), and near-complete absence of any other genetic components."
Eurogenes alleges, not without his usual charm, that:

Dienekes has a keen eye for things he wants to see. But he hasn't yet noticed that in all accurate analyses, there's significant Eastern European admix in North India. His monocle got fogged up in that instance.

Let us consider some pertinent facts: the Indian peninsula has been invaded multiple times from Central Asia, a process that continued long after the establishment of the Indo-Aryans during the 2nd millennium BC. Eurogenes may want to think that the "Eastern European" admixture in South Asia dates to his mythological Polish Indo-Europeans, galloping across the steppes on their horses, but there is, at present, no particular reason to think that this is the case

Furthermore, the "West Asian" component as a fraction of the "West Asian" + "Atlantic-Baltic" component reaches a minimum of 77% in the Pathans in populations from the northern parts of the Indian subcontinent. His own monocle is surely in greater need of de-fogging if I miss the 23% and he misses the >77%.
Indeed, the Europe vs. Caucasus ratio in Indian subcontinental populations is similar to that found in people from the Middle East and Caucasus region. It is not surprising that Eurogenes has abandoned his search for North European components in South Asia, going as far as reconstructing Ancestral North Indians as "Northern Europeans". Needless to say, he was wrong. The West Eurasian ancestry of the population of the Indian subcontinent is similar to that found in modern West Asian populations, not Slavs.
Eurogenes promises:

This shouldn't be too difficult. I'll use Dienekes' calculator for the job, and then check the results with LAMP.How poetic.

Been there, done that. It will be fun to see what "Northern European" components he will be able to squeeze out of the 0.9% N_E_Euro component that my software, in conjunction with his "test" calculator produces.
Why are the Kalash important?
There are three reasons why the Kalash are important in the study of Eurasian prehistory:
The Kalash are crucial for those interested in the origins of Indo-Iranians, and the fact that they are, indeed, a simple West/South Asian mix is not without significance for that question.
UPDATE:
Here is the result of a PCA analysis of the Kalash together with 50 synthetic individuals from each of the S_Asian, W_Asian, and N_E_Euro components of Eurogenes K=10 "test". This was calculated with smartpca with numoutlieriter set to 0. 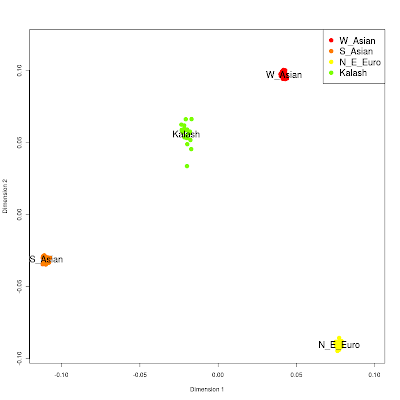 It is evident that the Kalash appear to fall on the S_Asian to W_Asian line, and toward the W_Asian pole, consistent with being a population of those two origins, with the W_Asian component predominating.
UPDATE II:
As mentioned in the eurasia7 post, the Kalash tend to form population-specific components in ADMIXTURE analyses, so they are generally not included in my runs. So, I run the K=7 analysis again, but this time I included the Kalash. Here are the top populations of the component that was modal in the Kalash:
[186,] "Kurd_D" "50.2"
[187,] "Kurds_Y" "50.7"
[188,] "Armenian_D" "50.9"
[189,] "Armenians_Y" "51.2"
[190,] "Adygei" "51.5"
[191,] "Chechens_Y" "53"
[192,] "North_Ossetians_Y" "53.2"
[193,] "Lezgins" "54.4"
[194,] "Georgians" "59.8"
[195,] "Georgian_D" "60.1"
[196,] "Abhkasians_Y" "60.5"
[197,] "Kalash" "63.2"
Here are their exact admixture proportions in this unsupervised ADMIXTURE run:
Kalash N=23
East_Asian: 0.5
Atlantic_Baltic: 1.5
South_Asian: 32.9
Sub_Saharan: 0.0
Southern: 0.0
Siberian: 1.8
West Asian: 63.2
UPDATE III (November 22): Eurogenes estimates that there is 4% "Northeast European" admixture for Kalash individual HGDP00302. He managed to avoid the creation of a Kalash-specific component by including only a single Kalash individual in an ADMIXTURE experiment.
The Kalash do tend to create their own Kalash-specific component, and a good way to avoid such a component is to include each of them individually, and repeat the analysis 23 times. An alternative, and less time consuming way, is to create a single synthetic individual using the allele frequencies of the Kalash population as a whole. Even simpler, one could randomly pick a single individual (such as HGDP00302), but at the risk of picking an individual that has either much more or much less than average a particular type of ancestry.
Below are the admixture proportions of all the 23 Kalash individuals from the unsupervised ADMIXTURE run of UPDATE II. Individual HDGP00302 is 4th of 23 in terms of their "Atlantic_Baltic" component that peaks in Lithuanians (3%). The Kalash have 1.5% "Atlantic_Baltic" on average (median=1%, standard deviation=2.1%).
Posted by Dienekes at 12:35 PM
Email ThisBlogThis!Share to TwitterShare to FacebookShare to Pinterest
Labels: Experiments, South Asians