I have decided to make a new calculator for DIYDodecad that may be useful for individuals from the Balkans and Anatolia. You can download it from here at Google Docs (or here from sendspace). The terms of use are the same as for DIYDodecad v 2.0. To run it, you simply extract the contents of the RAR file in your working directory, and type bat.par whenever you typed dv3.par in the instructions.
The reference populations can be seen below. I have included all available Balkan populations, as well as Turks and Armenians. Moreover, I have included all available Turkic populations.
The marker set is the same as used in Dodecad v3. Three components emerge: one centered in the northern Balkans, one in eastern Anatolia, and one present in various proportions among all Turkic populations (see Turkic cline). 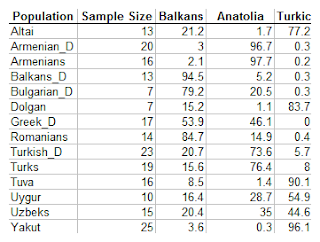 The components have been named accordingly, but please note that they do not necessarily reflect recent ancestors. For example, it is a good hypothesis that the Anatolia component was present in the Balkans even in ancient times, so one need not seek a recent Anatolian ancestor to explain its presence in a Balkan individual. Similarly for the Balkans component in Anatolia, which may reflect the diverse Balkan peoples that have settled in Anatolia since the dawn of history, so a present-day inhabitant of Anatolia need not seek a recent Balkan ancestor.

Likewise, the Turkic component is only part of the genetic makeup of the Turkic speakers who arrived in Anatolia, since those probably also carried West Eurasian population elements picked up en route from Siberia to Anatolia.

The way to interpret your results is to see whether you have an excess or deficiency of any component relative to your ethnic group. For example, an Anatolian Greek may have a higher Anatolia/Balkans ratio than a Balkan Greek and likewise for a Balkan vs. Anatolian Turk; the latter may also have a variable Turkic component which will reflect differential Central Asian input.
Posted by Dodecad Project at 11:58 PM
Email ThisBlogThis!Share to TwitterShare to FacebookShare to Pinterest
Labels: Anatolia, Armenians, Balkans, DIYDodecad, Dodecad, Greeks, Romanians, Slavic, Turkic