(Last Update: May 22)
I have included all Turkic populations available to me, together with all Turks of the Project (Turkish_D), as well as some other individuals that indicated other Turkic ancestry (e.g., Azeri, Kazak, Tatar) in a new analysis. I have also included Greeks, Armenians, Georgians, Syrians, Poles, and Russians to represent non-Turkic West Eurasian populations, as well as Koryak and Han to represent non-Turkic East Eurasian populations, Mongol, Evenk as Altaic but non-Turkic populations (Mongolic, Tungusic), and Yoruba as a Sub-Saharan outgroup.
Here is the PCA plot: 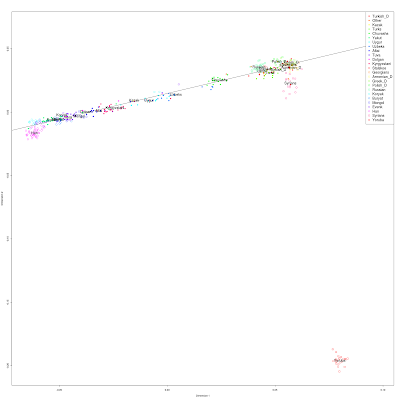 The line on the plot is a regression of all individuals except Han, Syrians, and Yoruba, all of which appear substantially off the main cline. The line's equation is:
y = 0.4044x+0.0147
with R2=0.9738.
It appears that a simple East-West Eurasian cline captures the main features of variation in present-day Turkic people, as could be expected for a people of an East Eurasian origin that spread across Central Asian and West Eurasian lands that were previously occupied by people of West Eurasian origin.
I have also carried out an ADMIXTURE analysis (K=3) which is shown below: 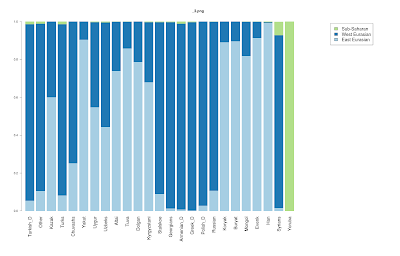 All the above analyses were performed on a set 16,278 SNPs that were in common between all populations, and were sufficient to capture these continental-wide contrasts, although probably a bit noisier than usual.
The average positions of populations in the PCA plot and their average ADMIXTURE proportions can be seen in the table below: 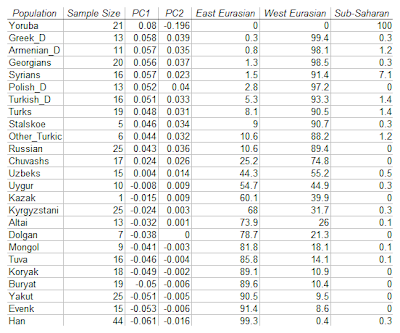 Project participants who wish to know their own numbers will get a line of five numbers: the 2 PCA co-ordinates, followed by their 3 ADMIXTURE proportions, as in the table above. Write to me (dodecad@gmail.com) to get those results.
Related:

UPDATE (May 22): A reader asks whether my observations on sample sizes are relevant in this case.
First of all, in the post Beware of sample sizes: why Ancestral North Indians came from West Asia, not Eastern Europe I showed that the projection of populations on principal components created by populations of unequal size tended to be biased toward the larger-sample population. In this case this is not a problem, as all samples were used to calculate the first two principal components.
Second, as a precaution, I used 98 West Eurasian non-Turkic samples and 105 East Eurasian non-Turkic samples, hence the two poles of the experiment were of approximately equal sample size, and the effect described in the previous post would not be observed even if this was a projection along that axis.
Third, the Yoruba (N=21) were used in this experiment as an outgroup to tease out the African shift of Syrians who, as can be seen, do not fall simply on the East-West Eurasian cline. The smaller sample size is not a problem here, as the objective of this analysis is not to measure shift on the Eurasian-African axis, but rather to see whether Turkic groups fall on a West-East Eurasian cline, which they do.
Posted by Dodecad Project at 3:39 PM
Email ThisBlogThis!Share to TwitterShare to FacebookShare to Pinterest
Labels: Experiments, Results, Turkic