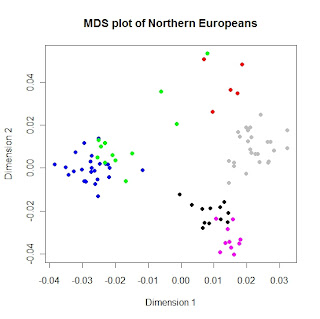 ADMIXTURE analysis with K=3 confirms this observation: dark blue corresponds to the Germanic cluster; green to the Finnish one, and light blue to the Balto-Slavic one.
Below are population averages: 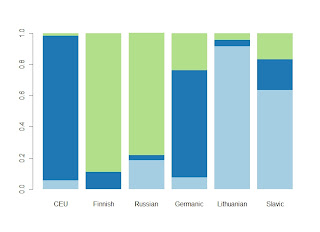 CEU are of the Germanic component, with a little Balto-Slavic.
Finns are of the Finnic component, with a little Germanic. Note, however, that this does not mean that they do not share substantial ancestry with Balto-Slavs! The Finnic component itself is composite, comprising of both East and West Eurasian elements, the latter of which could very well represent a common element between Finns and Balto-Slavs.
Vologda Russians seem to be primarily Finnic in origin, but with some distinct Balto-Slavic component.
The Germanic group is primarily in the Germanic component, with some Finnic; without revealing any information, I'll just say that this is contributed primarily by 3 Dodecad Project members who deviate towards Finns and whose ADMIXTURE analysis shows a higher than expected Northeast Asian component. Their outlier status is also visible in the MDS plot.
The Balto-Slavic component reaches its maximum in Lithuanians, while my Slavic sample is primarily Balto-Slavic, but shows both Finnic and Germanic admixture.
The study of structure in northern Europe is important not only for the region itself, but also for the world at large. The northern European component occurs at a lower frequency outside North/Central Europe and knowledge about its structure in its homeland may elucidate its origins in other regions.
Posted by Dodecad Project at 9:00 PM
Email ThisBlogThis!Share to TwitterShare to FacebookShare to Pinterest
Labels: Baltic, Experiments, Finnic, Germanic, Slavic