I have taken Behar et al. (2010) Armenians, Georgians, and Lezgins, and HGDP-CEPH Adygei, together with the three Dodecad Project members scoring highest in the "West Asian" component in order to study the structure of Caucasus populations. 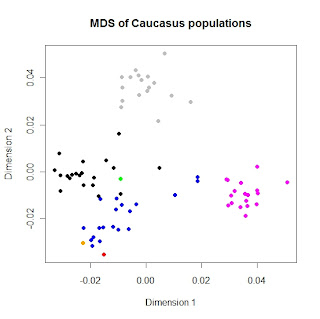 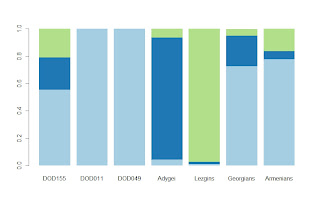 Turning to ADMIXTURE, analysis with K=3 confirmed the existence of the afore-mentioned clusters, with Adygei (dark blue), Lezgins (green), and Georgians/Armenians (light blue) forming their own distinctive clusters.
Going one step further at K=4, convergence became more difficult, but, nonetheless, the clusters produced by ADMIXTURE were also informative. Below, you can see the individual-level ADMIXTURE results:

While much "noisier", perhaps due to both the presence of actual admixture, and the difficulty of inferring structure in relatively closely related populations, four clusters emerge: light blue (Adygei), dark green (Lezgins), dark blue (Georgians), and light green (Armenians). The clusters become more apparent if we look at averages: 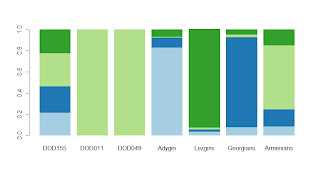 It is fascinating that four different populations, representative of four different language families (Indo-European and S/NE/NW Caucasian) can be distinguished in the Caucasus. With the exception of Armenians, none of the other populations have linguistic cousins in the world-at-large, although it has been speculated that the extent of Caucasian languages was once much broader than it is today, and some have even suggested that the Neolithic proto-farmers who dispersed into Europe were bearers of such languages.
It will be extremely interesting to study these clusters in other individuals from the Caucasus and Anatolia, as well as to see what is their relationship to the "West Asian" component which appears to be widespread in Eurasia.
Posted by Dodecad Project at 9:00 PM
Email ThisBlogThis!Share to TwitterShare to FacebookShare to Pinterest
Labels: Armenians, Caucasus, Experiments