I have taken the synthetic ASI population together with 25 HapMap-3 Chinese (CHB), 16 HGDP Papuans, and 9 Reich et al. (2009) Onge from the Andaman Islands to determine its relationships with other Eurasian populations.
Below is an MDS plot which shows that ASI does not appear to be particularly close to any of the other populations. 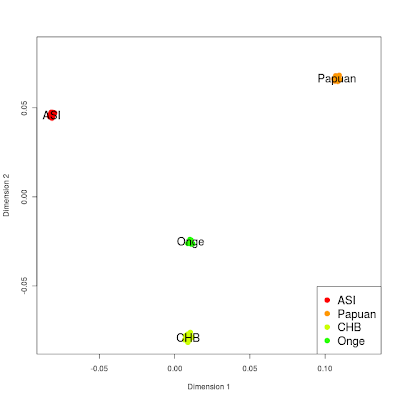 I have also ran supervised K=3 ADMIXTURE analysis that treated the ASI population as test data and CHB, Onge, Papuan as parental populations; the ASI turned out 100% "Onge", consistent with the idea that ASI is distantly related to Onge, although closer than with the other two populations.
It should be noted, however, that the similarity of ASI to Onge is not unexpected, since:
So, the Onge-ness of ASI is contingent upon the accuracy of Reich et al. (2009), but, anyway, the population of my ASI "zombies" seem to pass a second test of being reasonable standins for ASI in the sense of that paper.
Posted by Dienekes at 9:00 AM
Email ThisBlogThis!Share to TwitterShare to FacebookShare to Pinterest
Labels: Experiments, South Asians, Zombies