Wanting to see whether the Dagestan mystery would extend into Europe, I carried out an ADMIXTURE analysis including all my European populations. Once again, as this is done on only ~30k markers, a little noise on the low-level components is expected. 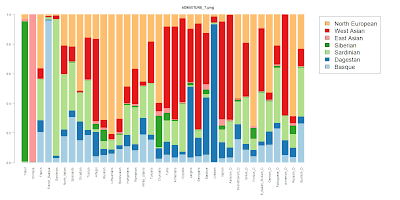 Admixture proportions can be found in the spreadsheet
Notably there is now both a Sardinian and a Basque centered cluster; the latter was formerly (in the standard K=10 analysis) split between "Southern European" and "Northern European". The Urkarah, Lezgin, and Stalskoe samples show the highest presence of the "blue" component, which I label, once again, Dagestan. Note, however, that you should not compare admixture proportions across ADMIXTURE runs for components that happen to be labeled the same (homonymous). Certainly "this" Dagestan is related to the "previous" Dagestan component, but do not assume they are identical.
Here is the Fst distance matrix between the 7 components:

Discussion
The most notable thing about this figure is the relative absence of the West Asian component in the periphery of Europe. The lowest values are seen in Basque, Sardinian, Orcadian, White Utahns, Lithuanians, Finns, and Scandinavians (in no particular order).
It is worthwhile to order the European populations in terms of their Dagestan component. Excluding the populations of the Caucasus, these are, in ascending order: Basque (0.7%), Sardinian, Cypriot, Belorussian, South Italian/Sicilian, Lithuanian, Tuscans, Portuguese, Greek (3.8%), Vologda Russian, Romanian, Finnish, Spaniards, North Italian, Dodecad Spaniards, Dodecad Russian, Chuvash, Hungarian, French (7.9%), German, Scandinavian, White Utahn, Orcadian (12.6%).
Interpreting this pattern is not easy, but it does seem that this component seems to have a V-like distribution, achieving its maximum in Caucasus and its environs, then undergoing a diminution, and achieving a secondary (lower) frequency mode in NW Europe.
The surprising appearance of the homonymous Dagestan component in India suggests a widespread presence of a common ancestry element. The West Asian element, by comparison seems to have a more normal /\-like distribution around its center in Anatolia-Caucasus-Iran region. It does reach the Atlantic coast, but is lacking in Scandinavia and Finland, and also in India itself.
This is just a piece of a broader puzzle, and the picture is not yet clear. However, we can tentatively say that whatever brought the "Dagestan" component to India was not a unidirectional process, but also brought a similar population element to western Europe.
Posted by Dienekes at 10:20 AM
Email ThisBlogThis!Share to TwitterShare to FacebookShare to Pinterest
Labels: Basque, Caucasus, Europe, Experiments, Iranian, Sardinian